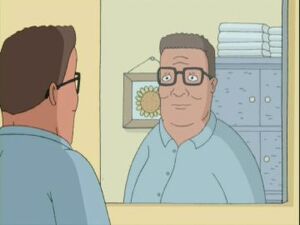 Henry "Hank" Rutherford Hill is a fictional character from the animated sitcom, King of the Hill, voiced by series creator Mike Judge. He is characteristically uptight and a strongly traditional conservative. He works as assistant manager at Strickland Propane in Arlen, Texas. He is married to wife Peggy, with whom he has one son, Bobby. He also has a niece named Luanne and a purebred Bloodhound named Ladybird.

In "One if by Clam, Two if by Sea", Peter, Cleveland, Joe, and Quagmire stand beside a fence drinking tins of beer and only saying “Yep” repetitively in the style of Hank Hill and his friends on King of the Hill.

In "Petergeist", Peter picks at a wound and pulls off his skin to reveal Hill's face. Then he laughs and mentions propane, finding Hill's job amusing. As the face was on Griffin's body, Hill was voiced by Seth MacFarlane.

"Bigfat" features a King of the Hill opening theme with Mike Judge voicing Hank after the Griffins greet their new neighbors, the Smiths, who moved into Cleveland's old house, Peter sees Roger. Stan Smith tries to keep Peter quiet but is forced to have to kill him as he starts to tell Quagmire about the alien. The entire opening turns out to be a dream by Hank Hill. Hank at first walks in and demands to know who the fat guy is sleeping with his wife Lois, before waking up again with his real wife Peggy and complains about not getting to find out if they can understand what Stewie says. Afterwards, the episode plays the King of the Hill intro, with Peter, Quagmire, Brian, and Joe standing in front of the Hill's backyard fence.