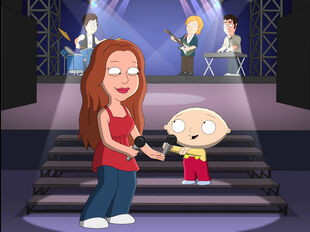 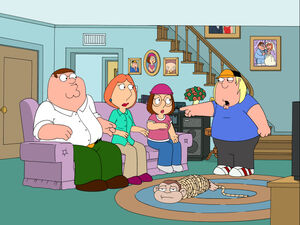 When Chris gets a D on another test, he blames the Evil Monkey. The family, tired of hearing about the monkey from a grown Chris tells him its all his imagination. Stewie finds out that Hannah Montana is coming to the Quahog Civic Center and tries to get tickets but they sell out quickly. Stewie is at first teased by Brian but finally opens up and admits he loves her and Brian reluctantly agrees to help.

Chris sets up a camera in his room to catch the evil monkey but only catches the family, Peter and Quagmire playing pranks and punching him Lois stealing from him and Herbert painting his portrait. Chris finally traps the monkey with seed and shows him to the family, while Meg reveals she has an even larger, more fearsome looking monkey. Unfortunately no one cares. The monkey begins to explain his background over Chris' objections, generating sympathy from the family except for Chris. 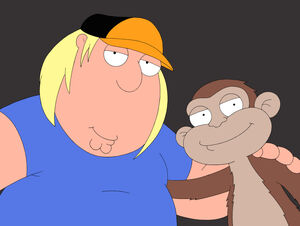 Stewie and Brian sneak into the Civic Center, Brian tells Miley that Stewie is her biggest fan and that he has a tumor the size of a football in his head which wins her over. The monkey tries again to make up with Chris but is rebuffed. The monkey helps Chris with his homework while he sleeps and Chris gets an A, finally winning him over.

Stewie shows Miley a song he wrote then sings it showing how the Monkey and Chris get along so much.

When Chris and the monkey go to a father-son barbecue, Peter becomes jealous. Chris responds that Peter is never there for him or helps him. Their distaste for each other escalates into open warfare between the two.

When Stewie hands Miley her cell phone he notices some strange interference in the signal. Brian and Stewie discover she is an android and theorize she was built by Disney to be the perfect teen idol. Stewie attempts to reprogram her but it fails and she runs amok. Lois and the monkey attempt to patch things up between Chris and Peter, setting them up with a lunch date. When they make up, they are interrupted by Miley who knocks out the monkey and carries him to the top of a building. Peter calls up Quagmire to bring out his biplane to attempt a rescue. As Miley is shot, revealing her android skeleton, she drops the monkey who clings to a ledge on the building. Miley is finally driven off the top of the building, falling to her destruction. Peter rescues the monkey just as he loses his grip. The monkey leaves the Griffins to move in with Jake Tucker.

Retrieved from "https://familyguy.fandom.com/wiki/Hannah_Banana?oldid=218669"
Community content is available under CC-BY-SA unless otherwise noted.