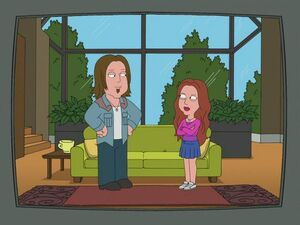 Hannah Montana is an American television series, which debuted on March 24, 2006 on Disney Channel.

The series focuses on a girl who lives a double life as an average teenage school girl named Miley Stewart, played by Miley Cyrus, by day and a famous pop singer named Hannah Montana by night, concealing her real identity from the public, other than her close friends and family.

In "Hannah Banana", Stewie Griffin is watching an episode of the show, in which Billy Ray Cyrus, who plays dad Robby Ray Stewart on the show, is intrigued when Miley angrily tells him he's not Hannah's dad, prompting him to ask her to put the wig on. At the end of the episode, an announcement regarding the concert tour is made.

Retrieved from "https://familyguy.fandom.com/wiki/Hannah_Montana?oldid=193368"
Community content is available under CC-BY-SA unless otherwise noted.