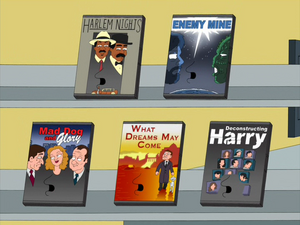 In "Brian's Got a Brand New Bag" when the Griffins go to the DVD sale at Quahog Video, the cashier offered to give Peter Griffin a copy of What Dreams May Come when he bought Road House. Peter turned down the offer, stating that he would kill the cashier if the DVD even touched Road House. The DVD of the movie is then seen singing the song "Maybe" from the musical Annie with the DVDs of What Dreams May Come, Mad Dog and Glory, Enemy Mine and Deconstructing Harry.