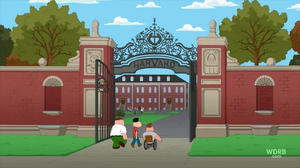 Harvard University is an American private Ivy League research university located in Cambridge, Massachusetts, United States, established in 1636 by the Massachusetts legislature. Harvard is the oldest institution of higher learning in the United States.

When Peter kidnaps the pope to help him bond with his father Francis Griffin in "Holy Crap", the Pope comments that he doesn't think that he is in Boston, and Peter supposedly points out Harvard, but instead points to a barn. When the Pope says "That's just a barn," Peter replies "Ohh, someone went to Yale!"

Brian and Stewie mention Harvard in the song "Road to Rhode Island".

Wellesley Shepherdson tells of attending Harvard in "Brian Goes Back to College".

Peter puts on a Harvard sweater when they get stopped by a Georgia police officer in "Cool Hand Peter".

When Peter discovers Joe has a student ID he took from a kid that gave him lip, Peter, Quagmire and Joe visit the Harvard University campus for lunch and have a wild night on the town in "The Giggity Wife".

Brian and his robot double pose as the 'Barklevoss twins' at Harvard in "Bri, Robot" where they claim Zuckerberg stole their social networking idea. In the same episode, Joe's nephew Barnaby Bananas, graduates from Harvard.

Retrieved from "https://familyguy.fandom.com/wiki/Harvard?oldid=218961"
Community content is available under CC-BY-SA unless otherwise noted.