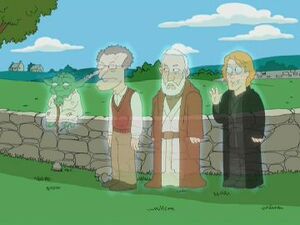 Hayden Christensen (born April 19, 1981) is a Canadian actor. He appeared in Canadian television programs when he was young, then diversified into American television in the late 1990s. He moved on to minor acting roles before being praised for his role of Sam in Life as a House, for which he was nominated for a Golden Globe Award. He gained international fame portraying the young adult Anakin Skywalker (Darth Vader) in the second and third Star Wars prequel trilogy films.

In the DVD re-release of the original Star Wars films, Hayden's head was inserted digitally over the image of Sebastian Shaw, replacing the original actor. "Peter's Two Dads" parodies this, as well as the controversial nature of the edit, when Peter sees the ghost of his father, Francis, alongside the ghosts of Yoda and Obi-Wan Kenobi. Christiansen then shows up introducing himself.

Hayden is voiced by Chris Cox.

Retrieved from "https://familyguy.fandom.com/wiki/Hayden_Christensen?oldid=134433"
Community content is available under CC-BY-SA unless otherwise noted.