Start a Wiki
watch 01:24
The Loop (TV)
Do you like this video?
General
References
Notes/Trivia
Quotes
Goofs 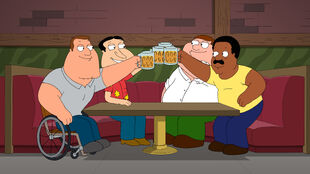 Cleveland is welcomed back 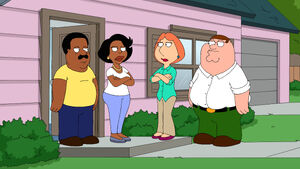 As Joe brags about his sexual exploits with Bonnie, Cleveland returns to Family Guy and takes some good-natured ribbing over The Cleveland Show.

As he and his family move back into his old house, he discovers it has been wrecked due to all of the past residents. After getting things fixed, the proceed with the move, cleaning up and sorting things. But when Chris breaks a vase on Rallo's head pretending to be a wrestler, he is spanked by Donna, setting off Lois who confronts her. Donna accuses Lois of being a bad parent while Lois accuses her of being a child abuser and they refuse to have anything to do with each other, forbidding their husbands for talking either. 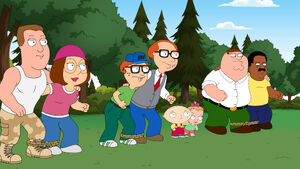 At the Drunken clam, Joe plans for Susie's first birthday party as Cleveland walks in. He and Peter try to decide who leaves and they decide to find a place where they can meet without being found. They try a flight and Peter poses as a cop, but they are caught and punished by their wives. As Chris finds Peter on the couch, he suggest they find a way to get the wives together. Peter communicates by Morse code to Cleveland, they try various stunts that land Cleveland in the hospital and are questionable in taste.

At Susie's birthday party, they prepare for the three-legged race and while Lois wants to be Peter's partner, he really wants to be with Cleveland and puts his foot down. They both defy their wives and enter together, but when Peter trips and is hurt, Cleveland tries to carry Peter but settles for hugging and rolling. As the wives look on, they agree to be friends for the sake of the guys. As they race, they are beaten, but later they celebrate being friends at the Clam.

Retrieved from "https://familyguy.fandom.com/wiki/He%27s_Bla-ack!?oldid=206539"
Community content is available under CC-BY-SA unless otherwise noted.