He's Too Sexy for His Fat 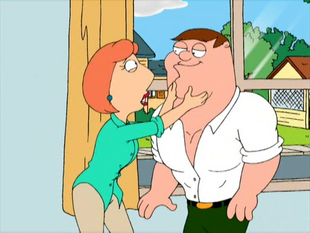 He's Too Sexy for His Fat
When Chris is sensitive about his weight, Peter takes him to get liposuction, but ends up getting some himself.

Plot: Brian catches fleas, which spread to the rest of the family. Although Peter suggests that they make peace with them, Lois tells him to call the exterminator. The exterminators arrive, but instead of gas masks, bug sprays and poisons, they are armed to the teeth. They shoot up the house destroying the fleas, but the house is closed for repair and renovation. To compensate, Brian puts the family up in a hotel. When the staff and guests make fun of Chris, he becomes self-conscious about his weight. 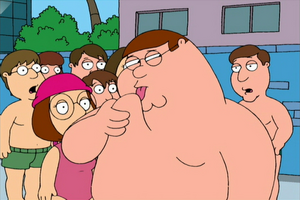 When Chris' diet and exercise regimen fails to yield results, Peter takes him to a surgeon to discuss liposuction. Chris decides to stick to his diet and exercise, but Peter goes in for extensive cosmetic surgery. Now very skinny, Peter decides to do things he could never do before, like looking at his penis, and riding on Brian. As he is now skinnier, he gains a bigger ego, especially when he gets more surgery and becomes muscular and gorgeous. Because of his new appearance, he gets invited to the Quahog Beautiful People’s Club. His ego grows bigger and bigger and his cockiness grows so enormous that he doesn't care if the Beautiful People's Club doesn't allow Chris in. Even when he comes home, he gloats right in Chris' face, saying how amazing the club is. Peter's attitude makes Chris' self-hatred worse, so Meg tries to calm him down by telling him he is "skinny" and that she is jealous. Chris then states he is jealous of her "mustache", traumatizing her. Lois feels extremely attracted to Peter, despite what he is doing, but when she sees what he is doing to Chris, she yells at him. 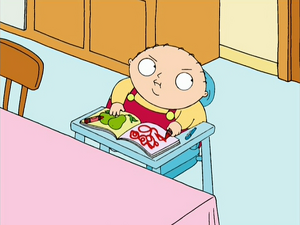 Peter decides to go for a drive, but he catches a glimpse of himself in the rear view mirror. Unable to tear himself away from his reflection, he crashes his car and is thrown into a vat of lard, which turns him back into his former fat self. He is surprised that his family is still treating him right, especially Chris. He apologizes and the family becomes normal again.

Meanwhile, Stewie grows fatter when trying to make Chris quit his diet. As a way to mock Chris, he begins eating more, and eventually develops an eating disorder. It comes to a point where he is so fat his arms cannot reach his face.

Previous Episode /// He's Too Sexy for His Fat \\\ Next Episode