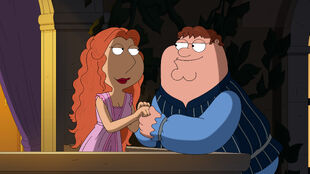 Heart Burn
The Griffins recount their own versions of three well-known love stories.

Plot: While picking up some items for their anniversary at an adult bookstore, Peter recounts three well-known love stories. 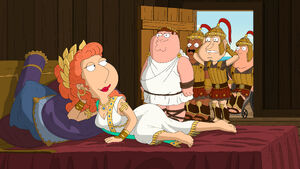 After the end of the Greek-Trojan War which started when Troy's chocolate mixed with Greece's peanut butter, the Trojan set sail for home, but their leader Paris has taken the Greek Queen Helen of Troy, setting off a whole new conflict. King Menelaus, along with his two best soldiers Achilles and ACL, pursue them to their fortress. There, he plans to enter by making a wooden horse as a gift, until Achilles points out a beaded curtain. Bursting in, they find a note that Paris and Helen have gone off to the Greek isles to get married with Achilles in dismay that her three fathers will be there. However, Paris is disappointed that Disney won't allow any of their Hercules characters to appear despite their ownership of Family Guy.

After their credit card is declined at the adult store, Peter and Lois steal what they can and make a run for it. Taking a moment during their romantic preparations, Peter recounts Romeo and Juliet. 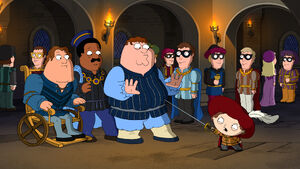 At a party held by her father who wishes her to marry a nobleman from the Boyardee family, Juliet meets Romeo, who is from a family they despise. Despite a spark between the two, her cousin Tybalt finds out and challenges him to a duel, but they are kicked out by Capulet. Outside, Romeo climbs up to Juliet's bedchamber and confesses his love, proposes to her, and she accepts. However, Tybalt finds Romeo with his friends in a tavern and slays Romeo's friend, Mercutio. Enraged, Romeo takes the sword and kills Tybalt in return, forcing Romeo to flee for his life. Juliet goes to Friar Lawrence and secures a potion to fake her death so she can escape and be with Romeo, but when he returns and finds her as still as death, he poisons himself. When she awakens, she finds him truly dead so she stabs herself in the chest to die alongside him.

After setting a fire at an Eyes Wide Shut party when Peter farts on the candles, they move along to Fatal Attraction. 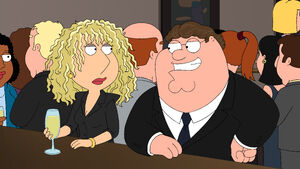 After meeting in a bar, Dan and Alex have hot sex but he then returns to his family. However, Alex refuses to let him go and starts stalking him. After killing the family pet, Dan confesses to his wife Beth about the affair. When Beth takes a bath, Alex confronts her in an attempt to murder her. Dan intervenes and believes he drowns her, but when they turn their backs, she pops up again, only to be shot by their son.

Chris provides the wrap up by performing a scene from his favorite love story, American Pie, although he has to use a chicken pot pie because the store was out of apple, and badly burns himself in the process.