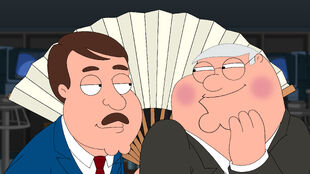 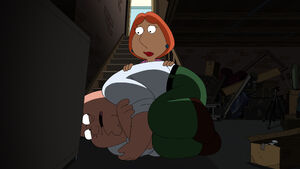 When Peter and the guys start comparing home values on Zillow, Peter discovers that his house was a murder house and the guys decide to go ghost hunting. When the guys get tired of his screwing around, they leave him in the dark in the basement overnight. When Lois finds him the next morning, they discover that his hair has turned white.

While having a drink at the bar, Peter finds a depressed Tom Tucker commiserating over a failed relationship. However, Tom takes notice of his white hair that makes him look distinguished and offers him a position in news. When Peter is unable to provide a crime report, Tom convinces him to just fake it. He succeeds when he blames all the crime on immigrants. Peter continues to spread outrageous stories with no sense which irritates Lois, but after he agrees to give it up, Donald Trump calls and offers Peter a job as his new press secretary, leading to the family about to move to Washington D.C.. 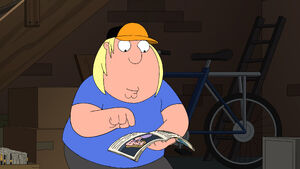 Retrieved from "https://familyguy.fandom.com/wiki/Hefty_Shades_of_Gray?oldid=216311"
Community content is available under CC-BY-SA unless otherwise noted.