Start a Wiki
watch 04:10
The Loop (TV)
Do you like this video?
General
References
Notes/Trivia
Quotes
Goofs

[For a complete script, see: "Hefty Shades of Gray" at the Transcripts Wiki]

Joe: Hey, you guys ever check Zillow?
Quagmire: Joe, who don't you shut the...
[Peter puts his arm on Quagmire's chest]
Peter: Tell me more about this silly word.

Cleveland: You might have a g-g-g-g-disembodied spirit in your house!

[Cutaway features Peter, thinking his house is haunted, after hearing noises]
Meg: Good news! The biopsy was negative!
Peter: [to Lois] Did you hear something?

Kristen: Hi, Chris.
Chris: Oh, hey Kristen. What's up?
Kristen: Not much. I wanted to know if you're gonna go to the dance on Friday.
Chris: No, probably not.
Kristen: Oh, that's too bad. I was thinking maybe, you and I could go together.
Chris: Oh, that's sweet, but like I said, I...I don't think I'm gonna go.
Kristen: Well, if you change your mind...
Chris: I SAID NO!!!
Kristen: Okay, jeez.

Chris: I'm hungry. I might grab a bite to eat.
Stewie: We all just ate, right?

[Stewie assumes Chris is gay]
Brian: You think he could be?
Stewie: Hey, I've been right about these things before. Remember what I said in 2009?
[Cutaway to a joke from "We Love You, Conrad", where Stewie says that Bruce Jenner is a woman]
Brian: Bruce Jenner is a man.
Stewie: No, Brian. That's what the press would have you believe, but he's not. Bruce Jenner is a woman. An elegant, beautiful, Dutch woman.

Cleveland: [to Quagmire] Only Lucifer would reveal himself to you, adulterer.

Joe: The only spirits I'm used to chasing are whisky and tequila.
[Everyone laughs]
Peter: That's so Joe.

Peter: We're like the male version of the female Ghostbusters.

Cleveland: I got scared and tried to run through the wall, leaving a hole, shaped like me.
Peter: Yeah, you can't do that in the basement, bud.

Brian: Stewie, I'm telling you. There's no way Chris is gay.
Stewie: Oh, why? Because he never hit on you? God, the ego.

Brian: Hey, Chris. What's up?
Chris: Just relaxing. Listening to some of Charles Manson's music. What's up with you guys?

Peter: Well, I'm a fat dad with white hair now. Time to become an issue at Hooters, after 9pm.
[Cutaway to Peter harassing waitresses at Hooters]
Peter: Hey, Ashley. Ashley! Ashley! I know ... I know what car is your car.

[Peter goes to the doctor about his white hair]
Dr. Hartman: So, how'd you get white hair again?
Lois: He was scared of a ghost.
Dr. Hartman: Yes, I remember hearing about this in med school ... or was it a Scooby-Doo? 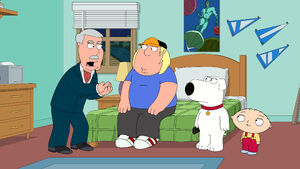 Stewie: [possessed by Doris Billingsly] I think we should all go investigate the still unsolved murder of Doris Billingsly, who never did anything but overcook one dinner in March of 1962.

Peter: What do I do?
Tom: You just act like everyone else is an idiot and shout over them. That way, you...
Peter: SHUT UP, I GET IT!
Tom: Terrific! Hey, why don't you come down to the station tomorrow, and...
Peter: I KNOW WHERE YOU WORK!
Tom: Again, terrific.

Peter: Crime is way up and you know why? 'Cuz of immigrants. I say, as Americans, we should all take a pledge to kick 'em out!
[Consuela watches him on TV]
Consuela: Only pledge I stand for is lemon pledge.

Stewie: Any of these mannequins doing anything for you, Chris?
Chris: Eh, I don't know. I guess the one without a head is pretty cool.
Brian: [disturbed] Alright, that's...that's something.
Chris: And that bin of chopped up ones over there. That could be okay, especially the one that looks kind of afraid.

Macy's Employee: Do you gentlemen need any help?
Stewie: No thank you, dear. We're just trying to get my brother to full mast.

Lois: Well, I hope you're happy. You're telling lies on the news, just to boost your own ego.
Peter: It's pronounced "Eggo", Lois, and I will thank you to leggo of mine.

Ivanka Trump: Hey, dad. I want you to meet my new friend, Meg.
Donald Trump: Please to meet you, Meg. You have a beautiful rack.
Meg: Aw, thanks.
Donald Trump: I was talking to my daughter.

Retrieved from "https://familyguy.fandom.com/wiki/Hefty_Shades_of_Gray/Quotes?oldid=223649"
Community content is available under CC-BY-SA unless otherwise noted.