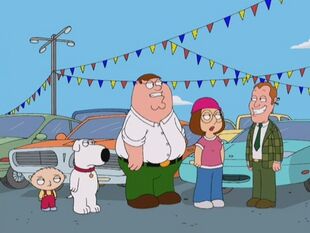 Hell Comes to Quahog
Peter blows Meg's car funds on a tank, so Meg goes to work at a superstore. 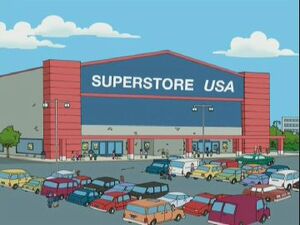 Meg is suffering from Peter's terrible treatment of her, later, he leaves her at the roller rink, so Peter takes her to buy a car. However, convinced by a swindling salesman after convincing the salesman to convince him, Peter buys a tank instead. But soon, Joe impounds the tank when Peter runs over him as he teaches Meg how to drive it. Meanwhile, Quahog suffers from a heat wave, exacerbated by the electricity-hoarding shopping corporation, Superstore USA, whose arrival in Quahog has put strain on local businesses and cost many residents, including Peter, their jobs. Even though Meg works at the store, Peter spearheads a protest of the store, but flip-flops after experiencing its “industrial” air conditioning and gets a job there instead. Peter does horrible at the job, taking advantage of working there and avoiding work as much as possible, while Superstore USA begins to cause misery for everyone else, as the town begins to look more and more awful, and people like Cleveland and Mort begin to lose their jobs. 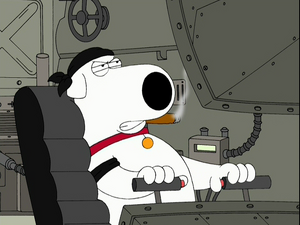 Brian and Stewie decide to get rid of Superstore USA the easier way. Meanwhile, Meg is promoted to assistant manager at Superstore USA, and is given the job to fire her father, as he is grossly incompetent, sleeps on the job and plays hide and seek in the coat racks. However, she chooses instead to resign, causing Peter to begin to say “I love you”; it is interrupted, though, by Stewie and Brian, who use the tank to destroy the shopping center, reverting conditions in Quahog to normal. Meg takes notice to how Peter was about to say he loves her, but Peter denies it and begins to make fun of Meg with Chris.

Retrieved from "https://familyguy.fandom.com/wiki/Hell_Comes_to_Quahog?oldid=217846"
Community content is available under CC-BY-SA unless otherwise noted.