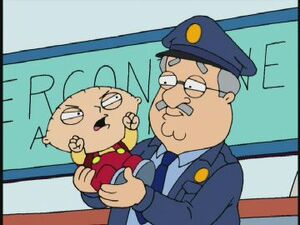 Henry is the security guard at the Quahog Airport that takes custody of Stewie after he is reported as a lost child by Jolene in "Chitty Chitty Death Bang". After convincing Stewie that he can't run away from his problems, Stewie repays him by freezing him in carbonite for a stated ten years.

Retrieved from "https://familyguy.fandom.com/wiki/Henry?oldid=174528"
Community content is available under CC-BY-SA unless otherwise noted.