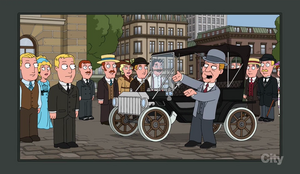 Peter and the guys watch American Inventor:The True Story of Henry Ford on The History Channel in "Passenger Fatty-Seven" where Henry Ford presents his automobile as a "Jew flattening machine," despite suggestions that it could also be used as transportation.

Retrieved from "https://familyguy.fandom.com/wiki/Henry_Ford?oldid=191953"
Community content is available under CC-BY-SA unless otherwise noted.