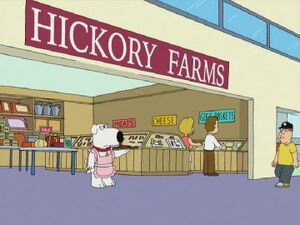 Once composed of more than 550 shopping mall-based stores in the United States and Canada, the company now does multichannel marketing, offering their products year round at club stores, mass merchandisers, and supermarkets, as well as through catalogs and their website. During the holiday season, they operate shopping mall kiosks as well.

Retrieved from "https://familyguy.fandom.com/wiki/Hickory_Farms?oldid=196798"
Community content is available under CC-BY-SA unless otherwise noted.