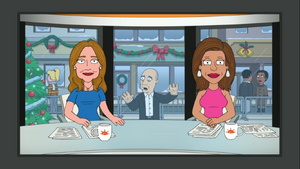 Hoda Kotb (born August 9, 1964) is an Egyptian American broadcast journalist, television personality, and author. She is a main co-anchor of the NBC News morning show Today and co-host of its entertainment-focused fourth hour.

In "The First No L", Kotb, on the right, hosts an edition of the Today show with Savannah Guthrie as Matt Lauer looks through the window, trying to beg his way back in.

Peter claims he get the idea from the Today Show to buy Lois a Pedalton exercise bike for Valentine's Day in "Mister Act". Lois is pleased that the suggestion came during Hoda and Savannah's second hour, and not the 'nonsense people' third hour.