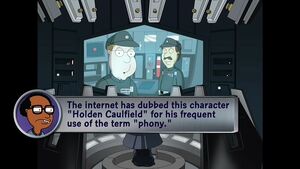 Holden Caulfield is the man who calls Peter Griffin a “phony” in "The Kiss Seen Around the World", for pretending to play a self-playing keyboard. He later levels the charge at Neil Goldman for admitting to Meg he wasn't going to jump.

Although unnamed in any episode, he is referred to as “Holden Caulfield”, the protagonist of J.D. Salinger's classic 1951 novel The Catcher in the Rye, who often accused others of being “phonies”.

He later appeared in Something, Something, Something, Dark Side as Admiral Ozzel, again using the "phony" line a scene before his death at the hands of Darth Vader, played by Stewie Griffin for coming out of light speed too early. The Fact-Ups special feature of the DVD acknowledges the fan name for him.

"Holden" is cut for time from "Follow the Money", but he can be heard voicing his displeasure with the title card, calling it a "phony."

He has a crowd scene cameo and is identified as 'the phony guy' in "No Giggity, No Doubt".

When Meg tears the beard off a mall Santa Claus in sexual frustration in "Christmas is Coming", Holden is there to point out that he's a phony.

He is part of the crowd of protesters at the statue of town founder Pawtucket Pat in "Pawtucket Pat".

Retrieved from "https://familyguy.fandom.com/wiki/Holden_Caulfield?oldid=228910"
Community content is available under CC-BY-SA unless otherwise noted.