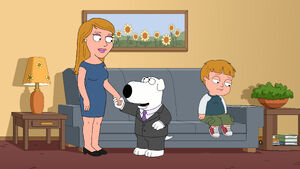 Holly is a shoe store clerk at the Quahog Mall that Brian dates in "Boy's Best Friend".

While shoe shopping for Chris at the mall, Brian scores a date with Holly singing karaoke at The Brass Monkey that goes exceedingly well. But when he picks her up for a second date, he finds out that she has a son named Kyle who gives him the cold shoulder. He tries to help him with his pinewood derby car but is still shunned until some bullies show up and Brian comes to his rescue, which wins him over.

But after a family dinner, Brian suggests a trip to Bob's Funland Amusement Park, but finds out that she wants to dump him and date other people, an ex-boyfriend in particular. Equally heartbreaking is that Brian and her son can't be together anymore either but Stewie suggests that he go find Kyle anyways. He arrives at the end of the pinewood derby to find Kyle finished next to last, but they are still happy he made an appearance. As they start to walk away, Holly stops to ask if Brian was busy on Saturday night. He arrives to sit with Kyle while Holly goes out on a date with Cliff.

Retrieved from "https://familyguy.fandom.com/wiki/Holly_%26_Kyle?oldid=230182"
Community content is available under CC-BY-SA unless otherwise noted.