[The Griffins, sans Brian, are on vacation during a hurricane]
Meg: Where's Brian?
Lois: Oh my God. When we evacuated, I think we forgot him.
Peter: It's okay, Lois. I left him chained up in the gully in the backyard.
[Cutaway to Brian nearly drowning in the backyard back at home]
Brian: Guys?...Guys!?

Chris: "Uh, Peter. I think that's the Holy Bible" is what Brian would say if he wasn't drowning in our backyard.
Meg: When he's gone, can we get a bird?

Lois: [referring to The Bible] It's Harry Potter for stupid people.

Stewie: Hey, guys. Could you tone it down? This is offensive to the open button shirt necklace community.

Adam: I think the leaf over my balls is poison ivy.

God: Well, I gotta go get yelled at for being late to something I didn't wanna go to in the first place. 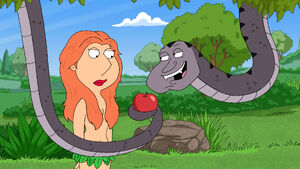 Eve: If we eat the apple, we're kicked out of paradise.
Serpent: They have antioxidants.
Eve: They do?
Serpent: Why would I lie? I'm a snake in a tree. I have nothing to gain from lying to you, aside from the minor sexual thrill of watching someone eat something and...and that's minor.

Lois: Wait a minute, are you just doing Bill Cosby bits?
Peter: Well, why not? All of his stuff is up for grabs. What is he gonna do, sue us?

Naamah: Now, it's time to get ready for school.
Ham: There's no school today. There was another mass stoning.
Naamah: Oh, another school stoning. When will we learn? If only those teachers had stones, then they could stone back.
Shem: Hello? Stone control?
Naamah: Shem, stones don't kill people. People kill people...with stones.
Ham: I don't think the founding fathers ever envisioned stones this large.
Noah: Can we not politicize the stoning? Alright? Thought and prayers. Thoughts and prayers for the bashed.

[Noah steals deconstructs his neighbor's house, causing the latter to fall out of his bathtub]
Biblical Cleveland: No no no no NOAH!

Noah: Alright, uh lions, you'll be with the baby antelopes. Uh, Crocodiles, you're with the water crossing wildebeests. Uh, bats, you'll be with bugs. Seagulls and McDonald's wrappers, pitbulls and city babies, and Christian Bale and annoying cameramen.
Annoying Cameraman: Hey, Christian. Looks like I'm rooming with you.
Christian Bale: OH, GOOD FOR YOU!

[Shem gets captured and taken away by a vulture]
Shem: SOMEBODY THROW AWAY THE BALLED UP UNDERWEAR IN MY ROOM! DON'T LOOK AT IT JUST THROW IT AWAY!

Jesus: Hey, hey, Mary. That half orange, half red one is mine so don't eat it. I wanna have it for when we watch The Sound of Music on Sunday.
Mary: We don't have to wait 'til Sunday. We can eat these eggs tonight.
Jesus: Oh, sorry. I got that big supper with the guys tonight but tomorrow's Friday. Date night. You and me. Nothing's keeping me from that. Somebody would have to nail me to a piece of wood and throw me in a cave grave.

Pontius: Grace? Grace, am I done? Can I go home?
[Grace Wheelberg from "Ferris Bueller's Day Off" enters]
Grace: Oh, not yet. You still have that meeting with that Judas Iscariot, regarding that Jesus fella.
Pontius: Ugh, right, Jesus. Man that guy's a pain in the ass.
Grace: Oh, well he's very popular. The lepers, the Canaanites, the fishermen, the Philippians, that woman at the well. Oh, they all love him. They think he's a righteous dude.

Jesus: Let's all sit on the same side of the table.

Waitress: Can I start you folks off with anything to drink?
Jesus: Yes, we'll all be splitting one cup of wine and can we have some bread and no other food at all?

Jesus: Before the night is over, one of you will betray me.
[Everyone stares intently at Cleveland]
Cleveland: This is some bull crap. I'm the only one who's the color we're supposed to be in this thing.

Jesus: Okay, good. Here's the bread. Now everybody listen up. Take this and eat it. It's supposed to be...like, my body.
Quagmire: Ew, what part?
Jesus: I'm not gonna say what part but you're supposed to eat it, while kneeling.

Jesus: Aw, son of a bitch! Alright, forget it. You know what? This whole thing is ruined! Okay? We'll just do it next week. I mean it's not like this is our last supper.

Brian: I was left to die.

Retrieved from "https://familyguy.fandom.com/wiki/Holly_Bibble/Quotes?oldid=222425"
Community content is available under CC-BY-SA unless otherwise noted.