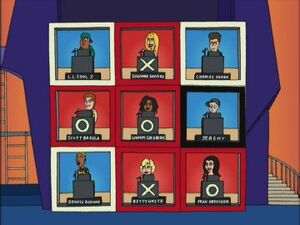 Hollywood Squares an American television comedy and game show in which two contestants play tic-tac-toe to win money and prizes. The "board" for the game is actually a 3×3 vertical stack of open-faced cubes, each occupied by an entertainer seated at a desk and facing the contestants. The stars are asked questions and the contestants judge the veracity of their answers in order to win the game.

Jeremy the Terminally ill Boy has his wish granted in "If I'm Dyin', I'm Lyin'" by appearing on the show with eight other celebrities. When asked if there is anything lower than absolute zero, he replies with his white cell count.

Retrieved from "https://familyguy.fandom.com/wiki/Hollywood_Squares?oldid=197144"
Community content is available under CC-BY-SA unless otherwise noted.