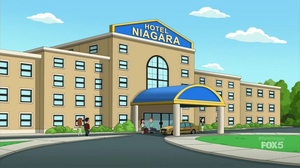 The Hotel Niagara is where Joe and the guys stay when he takes them on a trip with him to Niagara Falls, unaware that he plans to commit suicide after becoming depressed in "#JOLO" about being handicapped.

After two failed attempts to thrown himself into the falls, the guys are forced to restrain him by tying him to a hotel bell cart. They consider taking him back to Quahog to get help, but decide to go siteseeing while at the falls first.

Retrieved from "https://familyguy.fandom.com/wiki/Hotel_Niagara?oldid=176989"
Community content is available under CC-BY-SA unless otherwise noted.