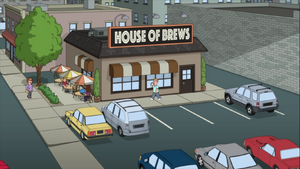 House of Brews is Lois' coffee house and escape to peace in her life in "Customer of the Week".

When she learns that they award a 'customer of the week', she sets her sights on winning, but gets frustrated when she's passed over twice. Chris suggests that she could save one of the staff member's lives. Aware that one of the baristas has a peanut allergy, she loads her car with peanuts which ends in a fiery car crash as well as the barista being run over. Lois panics when she learns that they'll be reviewing the security tapes. She finds that another employee is already aware of her secret so she kidnaps him, but promises to take care of his cat for him. At his apartment, she meets his two roommates and ends up having to tie them up when they get suspicious.

Retrieved from "https://familyguy.fandom.com/wiki/House_of_Brews?oldid=231872"
Community content is available under CC-BY-SA unless otherwise noted.