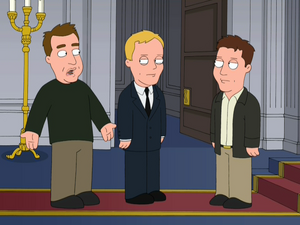 How I Met Your Mother is an American situation comedy that premiered on CBS on September 19, 2005. The show was created by Craig Thomas and Carter Bays. As a framing device, the main character, Ted Mosby (Josh Radnor), in the year 2030 recounts to his son and daughter the events that led to his meeting their mother, which explains the title and allows for a narration in the past tense. The show's other main characters are Marshall Eriksen (Jason Segel), Robin Scherbatsky (Cobie Smulders), Barney Stinson (Neil Patrick Harris), and Lily Aldrin (Alyson Hannigan).

The show appeared in two episodes of Family Guy, "No Chris Left Behind" and "Peter's Progress", the latter of which the three main men performed for King Stewart III. Unsatisfied with their performance, they are deleted from his TiVo, shot dead with arrows. In the former, the show was known as How I Met Your Father, in which Stinson and Mosby become involved in a homosexual relationship.

Brian's free revenge shot on Stewie in "Patriot Games" is similar to the How I Met Your Mother episode “Slap Bet”.

In "420", Peter Griffin tries to make sense of how Radnor's Mosby can grow up to become Bob Saget, the uncredited narrator, when Mosby is already an adult. He does so while filming an anti-marijuana video that references the Harold and Kumar films, which also starred Harris.

Peter notes that he became "your mother," riffing on How I Met Your Mother following transgender surgery in "Emmy-Winning Episode".

Retrieved from "https://familyguy.fandom.com/wiki/How_I_Met_Your_Mother?oldid=219328"
Community content is available under CC-BY-SA unless otherwise noted.