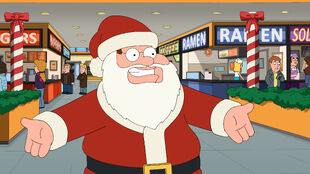 How the Griffin Stole Christmas
Peter becomes a mall Santa. 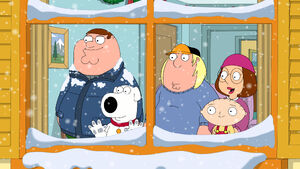 When Quahog experiences a snow day during the holiday season, Peter ruins Lois' grandmother's antique table in one of his stunts. When they go to the mall to replace it, Chris gets the idea to sit on Santa's lap and ask for a trampoline, an idea endorsed by Peter. But when the line refuses to move they find the mall is without a Santa. Pressed into service as a replacement, Peter discovers the job comes with numerous benefits. Leaving the Fuzzy Clam in a drunken stupor with dinner, he runs into the real Santa who is annoyed at his behavior and threatens him with the naughty list if he refuses to give up being Santa. 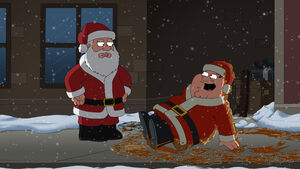 Peter calls his bluff and they engage in a war of pranks, but when the real Santa has had enough of such games, he slips his belt as a garrote around Peter's neck and gives him a final warning to give up the job. Frightened, Peter agrees, but to show there are no hard feelings, Santa gives him a Penthouse as a gift that Peter originally found when he was twelve. 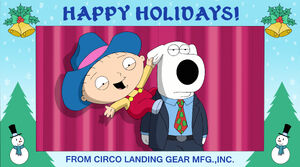 Meanwhile, Stewie discovers that Brian has been crashing office Christmas parties in hopes of scoring food and women, although without luck. Stewie turns up to get a laugh at his attempts, but has a great time instead and tags along on further attempts. To liven up an otherwise dead party at a printer company, Stewie threatens the lightest drinkers with dismissal, which inspires the real boss to follow though with the threat and Stewie stays on as an employee. When he realizes that people have lost their jobs because of him, and further threats from the boss, he takes it upon himself to cut the remaining employees checks for $11,000 each, which was the extent of his ability.

Previous Episode /// How the Griffin Stole Christmas \\\ Next Episode

Retrieved from "https://familyguy.fandom.com/wiki/How_the_Griffin_Stole_Christmas?oldid=213934"
Community content is available under CC-BY-SA unless otherwise noted.