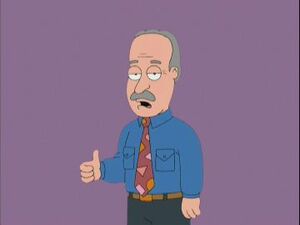 Howard Hesseman (born February 27, 1940) is an American actor best known for playing disc jockey Johnny Fever on WKRP in Cincinnati and schoolteacher, Charlie Moore, on Head of the Class. He prepared for his role as Fever by working as a DJ in San Francisco at KMPX-FM for several months.

Hesseman appears in an advertisement for 1980s television punchlines in "Chick Cancer".

Retrieved from "https://familyguy.fandom.com/wiki/Howard_Hesseman?oldid=123130"
Community content is available under CC-BY-SA unless otherwise noted.