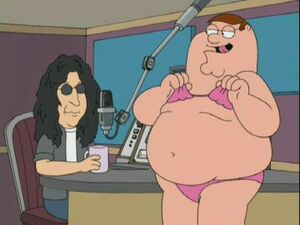 Howard Allan Stern (born January 12, 1954) is an American radio presenter and media personality, best known for hosting The Howard Stern Show, currently an uncensored talk radio show that airs on SIRIUS XM Radio. Before he went to SIRIUS XM in January 2006, Stern's radio show was syndicated across over 60 radio markets in the United States on terrestrial radio until December 16, 2005.

Stern is seen briefly during the montage in "The FCC Song" in "PTV".

He later appears as a judge on America's Got Talent in "No Country Club for Old Men" when Peter performs with Stewie's harmonica stuck in his rectum.

Retrieved from "https://familyguy.fandom.com/wiki/Howard_Stern?oldid=170767"
Community content is available under CC-BY-SA unless otherwise noted.