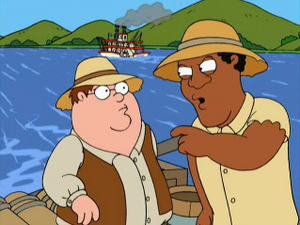 Huck Griffin is Peter Griffin's great grandfather who appeared in "I Am Peter, Hear Me Roar". He traveled with a friend named Jim who became angry for referring to him by his historically applied epithet.[1] When Griffin asked for an oar, he uses "N-Word Jim", and the two reconciled.

Retrieved from "https://familyguy.fandom.com/wiki/Huck_Griffin?oldid=207408"
Community content is available under CC-BY-SA unless otherwise noted.