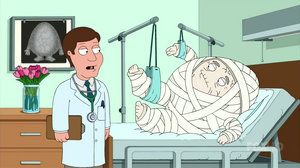 Humpty Dumpty is a fictional character in an English nursery rhyme. Though not explicitly described, he is typically portrayed as an anthropomorphic egg. The verse often cited is as follows:

Humpty Dumpty sat on a wall,

Humpty Dumpty had a great fall.

Retrieved from "https://familyguy.fandom.com/wiki/Humpty_Dumpty?oldid=176973"
Community content is available under CC-BY-SA unless otherwise noted.