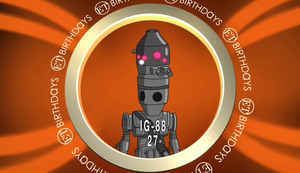 IG-88 is an assassin droid/bounty hunter from the Star Wars universe. He first appeared in The Empire Strikes Back.

In It's A Trap!, which parodied Return of the Jedi, Entertainment Tonight celebrated his birthday, which is shared with Lando Calrissian who was played by Mort Goldman, and Pignose. IG-88 turned 27 years old.

Retrieved from "https://familyguy.fandom.com/wiki/IG-88?oldid=197957"
Community content is available under CC-BY-SA unless otherwise noted.