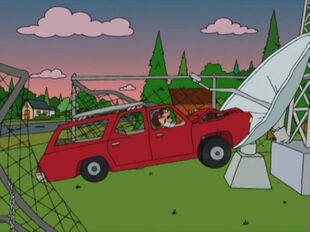 Peter and Meg crash into the television tower

I Never Met the Dead Man
Peter ruins the TV service for the entire town then suffers from withdrawals from no TV. 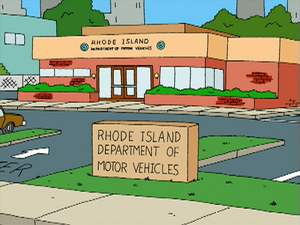 Meg is out to get her driving license. Peter, who would much rather watch TV, reluctantly gives her a lesson in which he teaches her to race red lights. Naturally, Meg completely fails the test, and Peter must drive her home. Unfortunately, he doesn't pay attention to the road, focusing instead on trying to watch TV through the window of a nearby house and crashes into the local satellite receiver dish, knocking out cable TV for the entire Quahog area. He places the blame on Meg, making her even less popular than usual, but he promises her a convertible when she finally gets her license. Peter, who according to Brian is addicted to television, copes with the loss of TV by creating a harness that holds a cardboard television set in front of his face, allowing him to pretend that things around him are on TV. 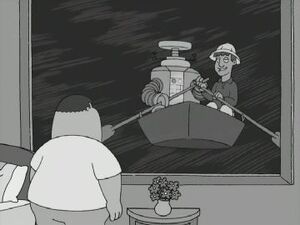 Meg finally cracks under the pressure of the town's resentment and tells everyone that Peter was the driver who wrecked the receiver. The town is ready to lynch Peter, but Lois convinces the town that now that TV is gone, everybody can focus on more wholesome activities. The townsfolk forgive Peter and move on to enjoy real life.

Peter learns to participate in family activities to fill the void. However, his enthusiasm for life quickly exhausts the rest of the family. When television service is restored, the family is unable tempt him back away from real life, as he opts instead to attend a Bavarian folk festival with William Shatner.

Meanwhile, Stewie is revolted by the broccoli he is fed. Rather than eat it, he plans to wipe out the crop worldwide by modifying a See 'n Say into a weather control device. He uses the remains of the satellite dish, which were tangled around the bumper of Peter's car, to amplify the machine's signal and he succeeds in creating a freezing rainstorm, but the process is interrupted by a bolt of lightning, which destroys the machine, though the storm rages on.

Lois takes Meg out on a driving lesson and the two get caught in the storm. Peter and Shatner begin running back to the Griffin's house barefoot in the rain, but are run over by Meg. Shatner dies on the spot while Peter is subsequently hospitalized in a body cast. The nurse leaves the television turned on, and Peter can't resist being drawn in.

Previous Episode /// I Never Met the Dead Man \\\ Next Episode

Retrieved from "https://familyguy.fandom.com/wiki/I_Never_Met_the_Dead_Man?oldid=216446"
Community content is available under CC-BY-SA unless otherwise noted.