[For the complete script, see: "I Never Met the Dead Man" at the Transcripts Wiki]

Lois: Open up for the airplane.
Stewie: Never! Damn the broccoli, damn you, and damn the Wright Brothers!

Stewie: So broccoli, Mother says you're very good for me; well I'm afraid I'm no good for you! The first rule of war is know thy enemy and I know this! Cold kills broccoli! It's so simple! All I need to do is build a machine to control the global environment... Forecast for tomorrow: a few sprinkles of genius, with a chance of doom!

Brian: Hey, barkeep, whose leg do you have to hump to get a dry martini around here?

Meg: Oh, my God, I hit William Shatner!
William Shatner: Light growing dimmer. Can't breathe. Beam me up God. [dies, his gut bursting out of the lederhosen]
Ensign Ricky: I did not see that coming. 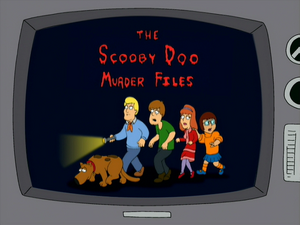 Announcer: We now return to the Scooby Doo Murder Files.
Fred: Gee whiz, gang. Looks like the killer gutted the victim, strangled him with his own intestines, and then dumped the body in the river.
Velma: Jinkies! What a mystery!
Scooby-Doo: Raoo!
Fred: You're right, Scoob. We're dealing with one sick son of a bitch!

Brian: [scratching his paw] My dogs are barking.

Tom Tucker: Because of an accident today at the Quahog cable company, all television transmission will be out for an undetermined amount of time. Of course, no one can see this news program, so it doesn't really matter what we say. I'm the Lord Jesus Christ. I think I'll go get drunk and beat up some midgets, how about you, Diane?
Diane Simmons: Well, Tom, I just plain don't like black people.
Quahog 5 Cameraman: Hey guys, we're still on in Boston.

Tom: Well Diane, that last report was so good I think you deserve a spanking.
Diane: Oh, Tom, I don't think your wife would appreciate that.
Tom: Diane, that frigid old cow lives in Quahog; she can't hear a word I'm saying.
Cameraman: Actually, we're back on the air in Quahog.

[Peter is on the phone in the living room failing to live without TV]
Peter: Alright, Mike, what's happening now?
Mike: Well, Sipowicz is trying to find out who stabbed the super.
["NYPD Blue" is on TV]
Andy Sipowicz: Are you going to tell me what I want to know or am I going to have to show you my ass?
Suspect: I ain't saying nothing.
[Sipowicz shows his ass]
Suspect: Alright, it was Jimmy the Hat!
Peter: Ah, forget it, Mike. Without actually seeing his ass, this is just radio.

Lois: I know you don't like broccoli, Stewie, but you'll thank me when you grow up big and strong like your father.
Stewie: A compelling argument. You've swayed me, woman. [starts scraping the broccoli onto Brian's plate] Mmmm. Oooh, that is good. I feel stronger already. It's good tasting and good for you.
Brian: [dumps the broccoli back on Stewie's plate] Nice try.
Stewie: Quadruped.
Brian: Mutant.

Chris: I never knew anyone who went crazy before, except my imaginary friend Captain Sprock!

Peter: Meg, what are you doing at West Beverly? Boy, they're really reaching for guest stars in the tenth season.

Retrieved from "https://familyguy.fandom.com/wiki/I_Never_Met_the_Dead_Man/Quotes?oldid=222190"
Community content is available under CC-BY-SA unless otherwise noted.