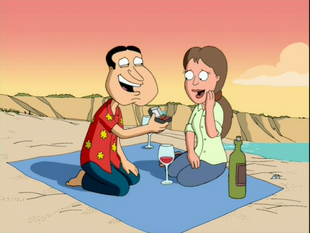 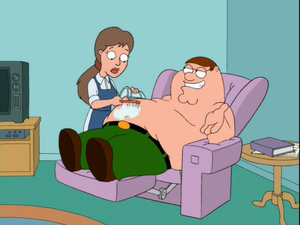 When Peter makes a surprise win on Wheel of Fortune, he wins a free maid for a week. While he shows off how he could cause a huge mess for her to clean up, she meets Quagmire who immediately falls for her. He gives up his philandering ways and becomes a caring lover as proposes to Joan at the sea shore at sunset.

Peter, however, becomes irritated by the changes Quagmire made for his new fiancée. He tries to get Quagmire back into his own ways, such as bachelor party strip clubs and trying out his foot fetish by acquiring the foot of the Statue of Liberty, spending thousands of dollars and calling many people he doesn't even know but it doesn't work. 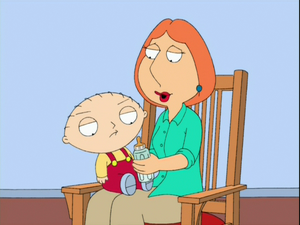 Meanwhile, Lois is concerned when Stewie’s teeth cause her pain during breastfeeding. Brian suggests that Lois begin weaning Stewie, to which Stewie objects. He becomes desperate for his milk, going as far as replacing the baby of another mother and milking Lois. Later on, Stewie finally does achieve freedom from Lois's breast milk, but Lois, preferring her reduced breast size, forces Stewie to continue the feeding under the guise of "bonding".

During the reception for his wedding, Quagmire turns back into his old self when he, due to Peter's actions, notices Lois’s engorged breasts. Realizing his mistake, he tries to break up with Joan but she threatens to kill him and then herself if he did so. He enlists help from his friends to get him out of it quick, at one point asking Cleveland how he got out of his marriage, to which Cleveland reminds him that he slept with Loretta. They choose to fake his death. They make a video of Quagmire being attacked by the guys dressed as a handicapped ninja, a Nazi with a ray gun, a pots-and-pans robot and his body being mauled by a dinosaur. Unfortunately, the video fails to convince Joan, so they enact plan B, by having Quagmire come home and have a sudden heart attack. Unfortunately, their plan hits a chink when Quagmire's coffin is to be covered with concrete, as Mayor West believes that it will guard against zombies, which will prevent them from digging up Quagmire, so Peter reveals he's alive. Joan is relieved, but Death has come and must collect a body. Joan jumps in front of Quagmire and touches Death, which kills her. Quagmire’s friends then inform Death that her last name was Quagmire and that she was suicidal, and so Death takes her body, allowing Quagmire to live; but not before Quagmire asks Death to leave the body for five minutes.

Retrieved from "https://familyguy.fandom.com/wiki/I_Take_Thee_Quagmire?oldid=216422"
Community content is available under CC-BY-SA unless otherwise noted.