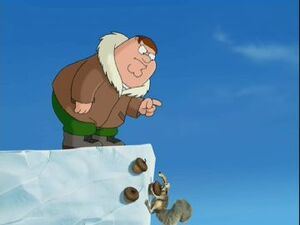 Ice Age is a series of animated films produced by Blue Sky Studios, a division of 20th Century Fox, and featuring the voices of Ray Romano, John Leguizamo, Denis Leary, and Chris Wedge. The series follows a group of mammals surviving the Paleolithic ice age and beyond.

In "Sibling Rivalry", Scrat is shown trying to take a nut out of a side of a glacier, and Peter Griffin scolds him for trying to steal his nuts. The scene was included as a promotion for the sequel Ice Age II: The Meltdown.

Retrieved from "https://familyguy.fandom.com/wiki/Ice_Age?oldid=212943"
Community content is available under CC-BY-SA unless otherwise noted.