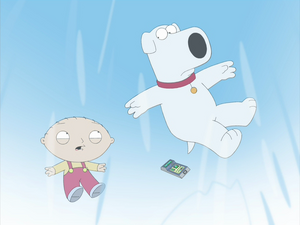 The Ice Age Universe was the fifth Universe visited by Stewie and Brian in the "Road to the Multiverse". When Stewie and Brian arrive there, they are trapped in a solid block of ice, leaving the reason for the ice age a mystery as Stewie is unable to access the remote. The two are able to escape from it when Stewie causes Brian to get excited enough for his tail to pave the way through the ice and hit the remote's button. Also in the universe, is Brian's poop, which was transported there from the Universe Without Christianity.

Retrieved from "https://familyguy.fandom.com/wiki/Ice_Age_Universe?oldid=146130"
Community content is available under CC-BY-SA unless otherwise noted.