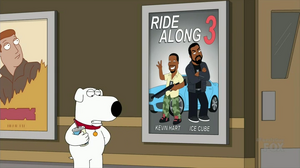 O'Shea Jackson Sr. (born June 15, 1969), known professionally as Ice Cube, is an American rapper and actor known for his work in Boyz n the Hood, Friday, Barbershop and the TBS series Are We There Yet?.

While visiting the Quahog Theaters to see Baywatch in "The D in Apartment 23", Brian pauses long enough to make a racially insensitive tweet about the film Ride Along 3, starring Kevin Hart and Ice Cube, noting that he's white and went to college. As a result, his tweet goes viral and he emerges from his film to find an angry mob waiting for him.

The poster image is recapped in "Petey IV".

Retrieved from "https://familyguy.fandom.com/wiki/Ice_Cube?oldid=200474"
Community content is available under CC-BY-SA unless otherwise noted.