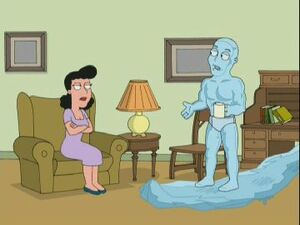 Iceman (Robert "Bobby" Louis Drake) is a fictional Marvel Comics superhero and a member of the X-Men. Created by writer Stan Lee and artist/co-writer Jack Kirby, he first appeared in X-Men (vol. 1) #1, (September 1963).

A mutant, Iceman has the ability of cryokinesis where he can freeze anything around him and can also turn his body into ice. Although he is an Omega-level mutant, Drake has yet to tap his full mutant potential. He has, however, begun to take more interest over the years in developing his abilities.

One of the original X-Men, Iceman has had a frequent presence in X-Men and Spider-Man related comics, video games, animated series and movies.

Iceman appears in "Hell Comes to Quahog" when his wife questions where he goes when he leaves. An obvious ice trail leads to a gay bar.

Iceman is voiced by Alec Sulkin.

Retrieved from "https://familyguy.fandom.com/wiki/Iceman?oldid=197841"
Community content is available under CC-BY-SA unless otherwise noted.