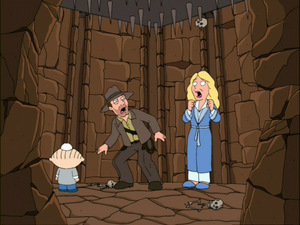 Dr. Henry Walton "Indiana" Jones, Jr. is a title character and the protagonist of the Indiana Jones franchise. George Lucas and Steven Spielberg created the character in homage to the action heroes of 1930s film serials. Jones is played by Harrison Ford in the films as an adult and has also been portrayed by River Phoenix as the young Jones in The Last Crusade and in the television series The Young Indiana Jones Chronicles by Corey Carrier, Sean Patrick Flanery, and George Hall. Particularly notable facets of the character include his iconic bullwhip, fedora, and leather jacket, sense of humor, deep knowledge of many ancient civilizations and languages, and fear of snakes.

Peter tells Meg that he won’t give her the antidote to the poison she just drank in "Fifteen Minutes of Shame" is from the Shanghai nightclub scene in the beginning of Indiana Jones and the Temple of Doom after Indiana is given poison.

Jackie Gleason's Ralph Kramden harasses Indiana Jones in "When You Wish Upon a Weinstein" for taking so long to take an idol safely.

A fight between Peter and Ernie the Giant Chicken in "Blind Ambition" leads the combatants under a World War II-era German plane like the one Indy and a Nazi fighter fought under in Raiders of the Lost Ark. In both cases, the opposing combatant was cut up by the propeller blades.

In "The Courtship of Stewie's Father", Stewie and Peter are dress like Indy and Short Round from Indiana Jones and the Temple of Doom.

Indiana and Stewie as Short Round appear in a cutaway in "Stewie B. Goode" when Stewie decides learning how to swim isn't as bad as the summer he spend in India.

During a fight between Peter and Brian in "Play It Again, Brian", Peter holds a keg above his head with the intent to hit Brian with it, and is kicked in the genitals, at which time the keg falls on his head. A similar fight happened in the film, when an Indian cult member was subject to it during a fight with Jones.

The family watches Yet Another Indiana Jones Movie in "Once Bitten" in which an elderly Indy is not pleased to run into yet another snake, while the snake feels the same way about aging potheads.

While being a mother figure to Peter in "Carter and Tricia", Tricia Takanawa makes Peter wear a baseball cap in imitation of Short Round where he is forced to deal with an elderly Indiana Jones.

To signify that Peter is 'whipped' by Lois in "Undergrounded", Joe badly imitates a whipping sound and compares him to 'Indiana James.'

Meg watches Indiana Jones and the Temple Beth Shalom in "Start Me Up".

Retrieved from "https://familyguy.fandom.com/wiki/Indiana_Jones?oldid=221199"
Community content is available under CC-BY-SA unless otherwise noted.