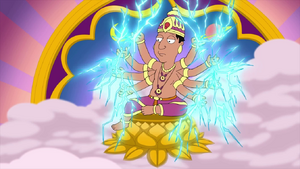 Indra is a Vedic deity in Hinduism, a guardian deity in Buddhism, and the king of the highest heaven called Saudharmakalpa in Jainism. He is often depicted as wielding a lightning thunderbolt and is comparable to other thunder gods such as Thor, Perun, and Zeus.

Indra gets to throw lighting bolts at Brian after he insults God in "Switch the Flip".

Retrieved from "https://familyguy.fandom.com/wiki/Indra?oldid=204482"
Community content is available under CC-BY-SA unless otherwise noted.