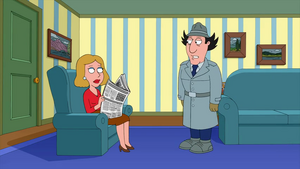 Inspector Gadget is a fictional police detective and protagonist of the cartoon and film series of the same name with various bionic gadgets built into his body. Gadget's nemesis is Dr. Claw, the leader of an evil organization, known as "M.A.D."

While Peter is dressed in armor in "And Then There Were Fewer", he says "Go-go Gadget Skis!", a reference to Inspector Gadget.

Inspector Gadget appears in "Bigfat", where he talks to Susanne and admits he's fathering a son with a different woman.

The Inspector Gadget theme plays as the sex scene music added in post-production in the Fatal Attraction story of "Heart Burn".

Gadget is voiced by Seth MacFarlane.