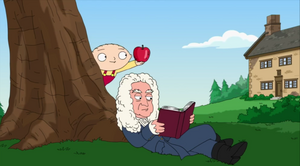 Sir Isaac Newton PRS (25 December 1642 – 20 March 1727) was an English mathematician, physicist, astronomer, theologian, and author. According to legend, Newton 'discovered' gravity when struck on the head by a falling apple.[1]

In "Absolutely Babulous", Stewie tries to make an award-winning pie by securing the same apple that struck Sir Isaac Newton. However, on his return to the present, he finds out that he prevented the discovery of gravity as everything floats away.

Retrieved from "https://familyguy.fandom.com/wiki/Isaac_Newton?oldid=215468"
Community content is available under CC-BY-SA unless otherwise noted.