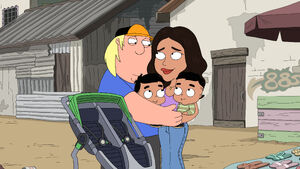 Chris steals her top after she loses it on a slide at Super Splash City waterpark, but when she calls him on it, he finds her attractive and Stewie convinces him to get a date with her.

When she is deported back to Mexico, she originally plans a quick return so Chris agrees to look after her twin boys, whom he names Juan and Two until she returns. Lois has major reservations about Chris' ability to care for two children and her concerns are well founded as he struggles to feed and care for them. When Consuela brings news that she can't return to the United States after all, Lois demands that they take the babies back to her rather than let Chris quit school to get a job to support them. On arrival in Mexico, they find Isabella in a crime-ridden village and Lois again steps forward to offer to get them back into the United States.

They call Quagmire to bring a plane to fly them out, but they are all intercepted by corrupt Mexican police who steal the plane and their car, leaving them all in the desert. When they are attacked by coyotes, Chris allows himself to be severely bitten to save the babies, forcing Lois to rethink her opinion of his determination to take care of them. They wander aimlessly until they are found by Consuela, who implanted the children with tracking beacons and they find they had actually wandered back into the US. Lois admits she is impressed that he would to to such lengths to save them and try to give them the best life possible. Chris admits to Lois that he had found out he isn't ready to deal with children and parts ways with Isabella.

Isabella is voiced by Aimee Garcia.

Retrieved from "https://familyguy.fandom.com/wiki/Isabella?oldid=220475"
Community content is available under CC-BY-SA unless otherwise noted.