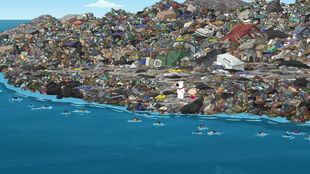 Island Adventure
Stewie sets out to recover his tricycle after Peter throws it away. 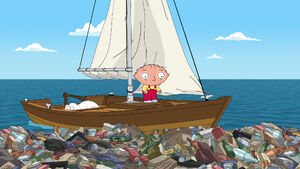 When Lois insists that the family clean out the garage, Peter decides to make short work out of it and throw away everything including including Stewie's big wheel. When he learns of this from Brian, they go to the dump to recover it, but finds it has blown away into the ocean headed for 'garbage island'; a mass of floating debris. They set sail for there, but after they arrive, Brian's attempt to place a discarded VCR in the boat results in it punching a hole in the bottom, sinking it.

On the island, they discover a bunch of hedonists washed overboard by various party cruises. Stewie figures out a way to power his big wheel using discarded Jimmy Buffett margarita machines, but Brian has decided to stay behind with the booze and the sex. Stewie is momentarily resigned to leaving his friend behind, but rigs up his big wheel with even more power using fans from discarded Dell laptops and tows the entire garbage island back to Quahog. 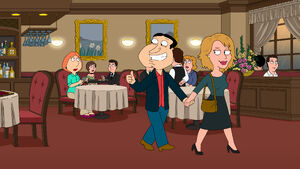 Meanwhile, Quagmire's shocked when he strikes out with a middle-aged woman. When she continues to reject his advances, Lois offers to help him. She coaches him through a date by texting him with what he should say, but she becomes furious later when she discovers that he's been turning this to his advantage to date multiple women. When she confronts him, he apologizes, but then tricks her into helping him pronounce the name of a singer to score with yet another woman.

Retrieved from "https://familyguy.fandom.com/wiki/Island_Adventure?oldid=212854"
Community content is available under CC-BY-SA unless otherwise noted.