View source
watch 01:25
Episode Recap: It's A Trap!
Do you like this video?
Play Sound
General
References
Notes/Trivia
Quotes
Goofs 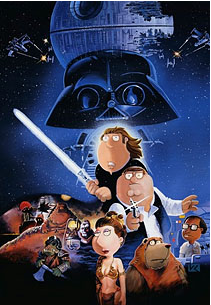 Poster for It's A Trap!

It's A Trap!
Peter retells the story of Return of the Jedi.

Plot: The episode begins in a similar fashion to the previous parodies, as the power suddenly goes off in the Griffin household. However, unlike the previous times, in which the act causes the Griffin family to be surprised, they instead complain about it because, in Stewie's words, 'We're going to do Jedi now, aren't we?'. Peter sighs, and asks the family to let him get through this. 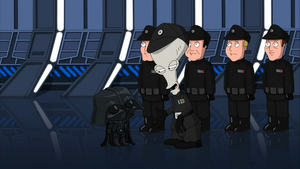 Darth Vader (Stewie Griffin) arrives at the second Death Star and is greeted by Moff Jerjerrod (Roger Smith). Upon hearing that the same design flaw that plagued the first Death Star is present in the new design, and commenting that they've run out of Family Guy characters to portray the Star Wars cast, Vader tells Jerjerrod to fix it before the Emperor (Carter Pewterschmidt) arrives. Meanwhile, on Tatooine, C-3PO (Glenn Quagmire) and R2-D2 (Cleveland Brown) arrive at Jabba's Palace to deliver a message to the Hutt (Joe Swanson), whereupon they are sold to Jabba, who commands Flick from A Christmas Story to lick the carbonite form of Han Solo (Peter Griffin) in a 'triple dog dare.' Later that night, Leia Organa (Lois Griffin), disguised as Boushh, frees Han from the carbonite prison. The pair are quickly captured and Han is sent to the dungeon with Chewbacca (Brian), who was caught eating out of Jabba’s trash. 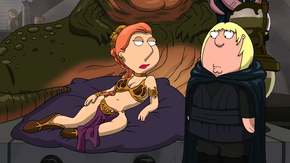 The next morning, Luke Skywalker (Chris Griffin) arrives and tries to barter with Jabba for the lives of his friends, but is thrown into the rancor pit despite Threepio’s best attempts to warn him and confronts Jabba’s Rancor (Rush Limbaugh). After killing the beast, Luke, Han and Chewbacca are brought to Jabba, who decrees that they are to be thrown into the Sarlacc (Meg Griffin).

Arriving at the Dune Sea, the trio are about to be flung into the pit when R2-D2 throws Luke his lightsaber, who then proceeds to attack Jabba's guards while rescuing Leia who kills Jabba. Boba Fett (Ernie the Giant Chicken) tries to kill Han but falls overboard off screen. Han rescues Lando Calrissian (Mort Goldman) after the latter is thrown over the skiff and despite being shot numerous times by the blinded Han. 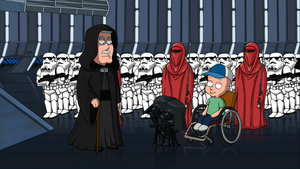 Meanwhile, Emperor Palpatine arrives and, after meeting with a sick boy named Jeremy, is informed by Vader that the Death Star will completed on schedule, but that his room will not be ready till 4:00pm. On Dagobah, Luke meets with Yoda (Carl), who tells the young Jedi that his training is complete and that he must face Vader once more. Before passing away, he reveals to Luke that he has a sister. Following Yoda's passing, Luke is confronted by Obi-Wan Kenobi (Herbert) who reveals that Leia is his sister because she is 'the only other woman in the galaxy.'

At Sullust, as the Rebel fleet assembles, Mon Mothma (Angela) and Admiral Ackbar (Klaus Heisler) announce that their plan is to 'do exactly the same thing we did last time', saying that Han will lead a strike team to destroy the shield generator on Endor while Lando will fly a squadron of fighters into the Death Star and destroy the reactor core. 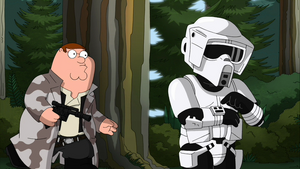 As Luke, Han, Leia, Chewbacca, Artoo and Threepio arrive on Endor, they find a pair of scout troopers in the forest and, after being alerted to their presence when Han steps on a boombox, set out on bikes to warn the garrison base. Luke and Leia take off in pursuit and manage to stop them, though Leia is knocked out when a meteor fragment from the rubble of the planet Alderaan’s destruction hits her. She is found by Wicket (Tim the Bear), who, after being offered a cracker, reveals that he found her because her period is about to start. Meanwhile, onboard the Death Star, the Emperor orders Vader to go to the moon and wait for his son.

As the others continue to search for Leia, they come across a hot girl from Florida and her mother. Chewbacca rushes towards them, and although Han tries to stop him, they all end up captured in a net trap. Although Artoo frees them, they find themselves surrounded by Ewoks, who bow in the presence of the 'Gold Guy' (Threepio) and are taken to Bright Tree Village, where they are freed after Luke performs a magic card trick, and are reunited with Leia. 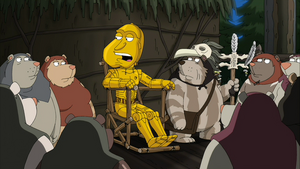 As Threepio tells the Ewoks the story of The Fresh Prince of Bel-Air, Luke reveals to Leia that she is his sister, that Vader is their father and that he must leave to face him. He soon leaves to confront Vader, who attempts to coerce his son to accompany him to see the Emperor, succeeding when he reveals that it’s Taco night.

The next day, Han and the others arrive at the Endor bunker and break inside, forcing the Imperial personnel to go outside and dig their own graves. When Leia comments on how dark the request is, Han justifies his actions by proclaiming that 'there's enough cutesy crap in this movie'. However, they are soon captured by reinforcements as the Alliance fleet arrives in the system and is pinned down by the assembled Imperial navy.

Onboard the Death Star, the Emperor reveals to Luke that the Death Star is operational as the station's superlaser first kills Will Robinson from Lost in Space, then destroys the Alliance star cruiser Liberty. He then taunts the work of Seth Green, who voices Chris/Luke, which finally snaps Luke from his calm. As he retrieves his lightsaber intending to strike Palpatine down, his blade is met by Vader’s. The pair fight for some time until Vader cuts down the catwalk Luke had leapt to, which leads him to wonder if he's OK. When the Emperor expresses his indifference, Vader explains that they will be lucky to escape without a lawsuit. Hoping to anger Luke into fighting him once more, Vader once again taunts Seth Green, causing Luke to explode in rage, knocking Vader down and slicing off his arm. However, he refuses to kill his father. Angered by this, Palpatine using Force lightning to attack Luke. In pain, Luke pleads for assistance from his father, who picks up Palpatine and throws him down to the reactor core to his death. 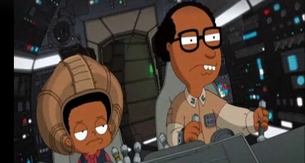 As the Millennium Falcon and other Alliance fighters travel to the power core, Vader pleads with Luke to remove his mask, so he can see him with his own eyes. As he attempts to do so, however, he snaps the Sith Lord's neck, killing him instantly. Proclaiming the death to be the result of what 'the Emperor did…a while ago', Luke takes the body onboard a shuttle and leaves the Death Star as the Falcon destroys the station’s power core, causing the battle station to explode. As the Alliance celebrates its victory later that night, Luke turns to the Force ghost's of Obi-Wan and Yoda, who are joined by Anakin Skywalker, who complains about his newly jacked up neck and calls Luke a murderer.

As the story comes to its conclusion, the power comes back on in the Griffin household, where Peter declares the Star Wars saga complete and that The Cleveland Show will handle the prequels. Chris then wonders what Peter has against Seth Green and says that he’s not that big a fan of Seth MacFarlane, a comment to which Lois and Meg agree, while Peter, Stewie and Brian, all voiced by MacFarlane, dispute. They then complain about MacFarlane’s work on Family Guy, to which Peter exclaims that he hopes people will remember the laughter.