It Takes a Village Idiot, and I Married One 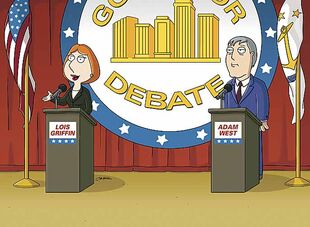 It Takes a Village Idiot, and I Married One
Lois runs for mayor of Quahog against Mayor Adam West. 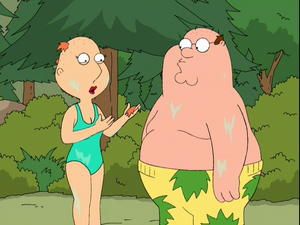 The Griffin family is vacationing at Quagmire's cabin. While there, the family goes swimming in Lake Quahog, but something in the water causes all their hair to fall out. They see that the Quahog Oil Refinery is dumping toxic waste into the lake. Lois complains to Mayor Adam West, who admits that he sanctioned the dumping in exchange for free oil. Outraged, Lois decides to unseat Mayor West in the upcoming mayoral election. 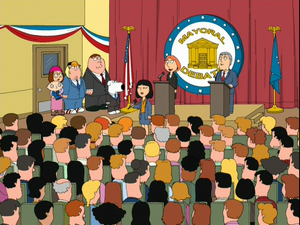 Though clearly more intelligent than her opponent, Lois’ campaign falters as Mayor West proves more politically savvy than she is while Lois bores voters with detailed plans to improve the city, Mayor West garners support simply by avoiding answering questions and acting in a patronizing manner. Brian, observing that “undecided voters are the biggest idiots in the country,” advises Lois to dumb down her campaign. She soon discovers that she can generate support merely by dropping controversial terms such as “Jesus” and “terrorists” in meaningless ways, and by answering questions about her policy plans only by saying “9/11.” She wins the election, and continues to use fear tactics to raise funds for cleaning up the lake.

After the cleanup is completed, Lois has cash remaining, and embezzles $600 to purchase a new purse. Later she is tempted by a $4,300 fur coat. Bob Grossbeard, the president of Quahog Oil, offers to buy it for Lois if she will allow Quahog Oil to resume dumping into the lake. Lois accepts the bribe and the waste flows again. As the lake is once again spoiled, causing deformities and the normalization of Jake Tucker, Lois realizes how power has corrupted her and resigns as mayor, telling West she can have his job back. Adam West declares himself to be mayor again, despite the fact that, as one onlooker points out, there is no legal justification for him to do that and West's reinstatement would require a snap election. West pulls a gun and shoots the objector, and a few other onlookers as well. Despite West's blatant act of assault with a deadly weapon and possible homicides, no one in Quahog defends themselves against him, attempts to restrain him, or question his moral judgment to be mayor.

Previous Episode /// It Takes a Village Idiot, and I Married One \\\ Next Episode