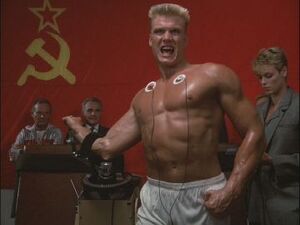 Ivan Drago is a fictional character in the film Rocky IV (1985). He is portrayed by Dolph Lundgren. The character and his catchphrases have gone on to inspire multiple mentions in popular culture, including in the episode, "Brian Goes Back to College".

When Peter and the guys buy a Russian bootleg copy of Rocky IV in "Petey IV", they find it ends with Ivan winning the fight by cutting part of the film after Rocky gets back up from a knockdown.

Retrieved from "https://familyguy.fandom.com/wiki/Ivan_Drago?oldid=200465"
Community content is available under CC-BY-SA unless otherwise noted.