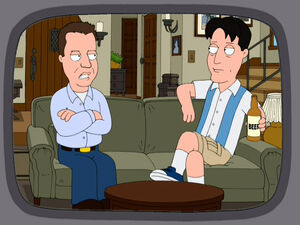 Jean-Paul Christophe Manoux (born June 8, 1969) is an American actor. He played surgical resident Dustin Crenshaw in ER and both Curtis the Caveman and Vice Principal Hackett in Disney Channel's Phil of the Future.

Manoux provided the voice for Jon Cryer's Two and a Half Men character Alan Harper in "Ocean's Three and a Half".

Retrieved from "https://familyguy.fandom.com/wiki/J.P._Manoux?oldid=197962"
Community content is available under CC-BY-SA unless otherwise noted.