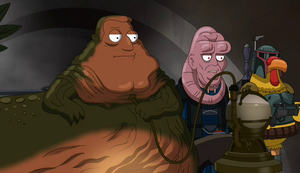 Jabba the Hutt is a fictional character in George Lucas's space opera film saga, Star Wars. He is designed to be a large, slug-like alien.

Jabba the Griffin in "He's Too Sexy for His Fat" is a parody of Jabba.

For Family Guy's parody of Return of the Jedi, entitled It's A Trap!, Jabba is played by Joe Swanson, who previously played one of Luke Skywalker's colleagues, Biggs Darklighter, in Blue Harvest and the Imperial Probe Droid in Something, Something, Something, Dark Side. Jabba was first mentioned in Dark Side, when Boba Fett escaped with Han Solo's frozen body.

As Donald Trump tries to force himself on Meg Jabba the Hutt-style in "Trump Guy", Mike Pence sits at his elbow and cackles in a parody of Salacious Crumb.

Retrieved from "https://familyguy.fandom.com/wiki/Jabba_the_Hutt?oldid=224566"
Community content is available under CC-BY-SA unless otherwise noted.