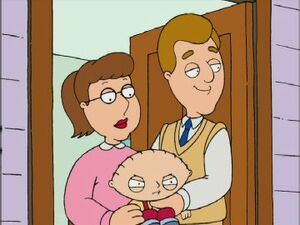 Jack and Sarah are Stewie Griffin's foster parents after he was taken by Sandy Belford in "Love Thy Trophy". They are also the foster parents of children from various races, including Pablo of Hispanic descent, and Li, their only adoptive daughter, of Asian, most likely Chinese, descent. They agreed to give Stewie back in exchange for Meg's Prada bag.

While their kids were in attendance for the performance of The King and I in "The King Is Dead", they were not.

Retrieved from "https://familyguy.fandom.com/wiki/Jack_%26_Sarah?oldid=197852"
Community content is available under CC-BY-SA unless otherwise noted.