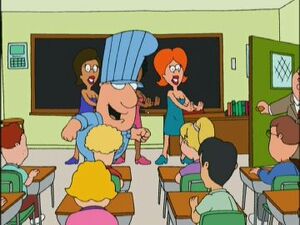 Jack Sheldon (November 30, 1931 – December 27, 2019) was a jazz musician, renowned equally for his trumpet playing and gravel-voiced singing. He was a regular member of the orchestra on Merv Griffin's long-running TV show. He is also known for his musical work on the children's cartoon show Schoolhouse Rock!.

For Family Guy, he has voiced The Bill, from "I'm Just a Bill" in "Mr. Griffin Goes to Washington".

Although not credited as the voice, the "Vagina Junction" Conductor is based on the conductor from "Conjunction Junction"; another Schoolhouse Rock short, in "Running Mates".

Retrieved from "https://familyguy.fandom.com/wiki/Jack_Sheldon?oldid=217808"
Community content is available under CC-BY-SA unless otherwise noted.