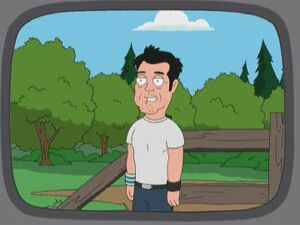 Jackass is an American television series, originally shown on MTV from 2000 to 2002, featuring people performing various dangerous, crude, ridiculous, and self-injuring stunts and pranks. The show served as a launchpad for the acting careers of Johnny Knoxville and Bam Margera. The series has also been the basis for three movies.

Stewie Griffin runs into the bathroom and beats up his father Peter while he’s on the toilet in "Petergeist", similar to an act in Jackass the Movie, in which Bam Margera does the same to his father Phil Margera. The bit uses the name “Stew-O,” a parody of stunt performer Steve-O.

In "The Man with Two Brians", after seeing an episode where Knoxville gets shot in the face while Bam Margera, Jason Acuña, Steve-O, and Preston Lacy watch and laugh, Peter and his friends decide to film their own highly dangerous stunts.

The series Douchebags that aired on PTV follows the same premise as this show.

When trying to get Stewie into a second commercial in "The Peanut Butter Kid", Peter and Lois find the competition much tougher, including a kid who was crapped on in a Jackass movie.

Retrieved from "https://familyguy.fandom.com/wiki/Jackass?oldid=218271"
Community content is available under CC-BY-SA unless otherwise noted.